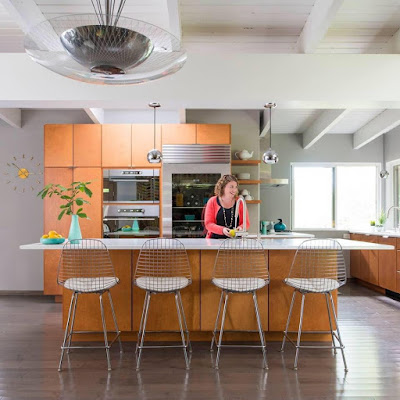 True Home Restorations is a boutique design firm focusing all efforts on homes built between 1950 and 1975. While Aletha personally prefers the modern aspect of midcentury design, she has a soft spot for the modest details of the era as well. Bring on the wood paneled walls, slate entryways, stone fireplaces, Roman brick planters, tongue & groove ceilings, and huge windows! Oh, and don't forget those pink tile bathrooms - there is much to love in a colorful world.

Ever since she was a young girl, Aletha has been fascinated by midcentury Americana. From the music & cars, to the homes & clothing, she continues to study the post-WWII era to sharpen her midcentury design skills. Inspired by color, pattern, & nature, Aletha loves nothing more than creating fresh, midcentury-inspired spaces.
Aletha calls Grand Haven, Michigan home, which she shares with Greg, and their three children. After redesigning their own 1959 ranch in 2012/2013, she opened True Home Restorations to assist other homeowners with the same overwhelming feat. In their free time, Greg & Aletha are working to restore a neighborhood grocery market built in 1950 in the Streamline Moderne style, which will eventually become home base for True Home Restorations.